You are here: Home

Information About The Art Deco Period Of Jewelry

Art deco Jewelry is visually stunning and feature beautiful geometric designs. The styles in this era saw large rings decorated with various gemstones. More often than not the rings had a centred colored stone or sometimes a diamond which were surrounded by smaller diamonds. Many were multicolored using gemstones such as emeralds, aquamarine and of course diamonds. The bands of the rings were also set with gemstones including diamonds, saphires, rubies and emeralds. 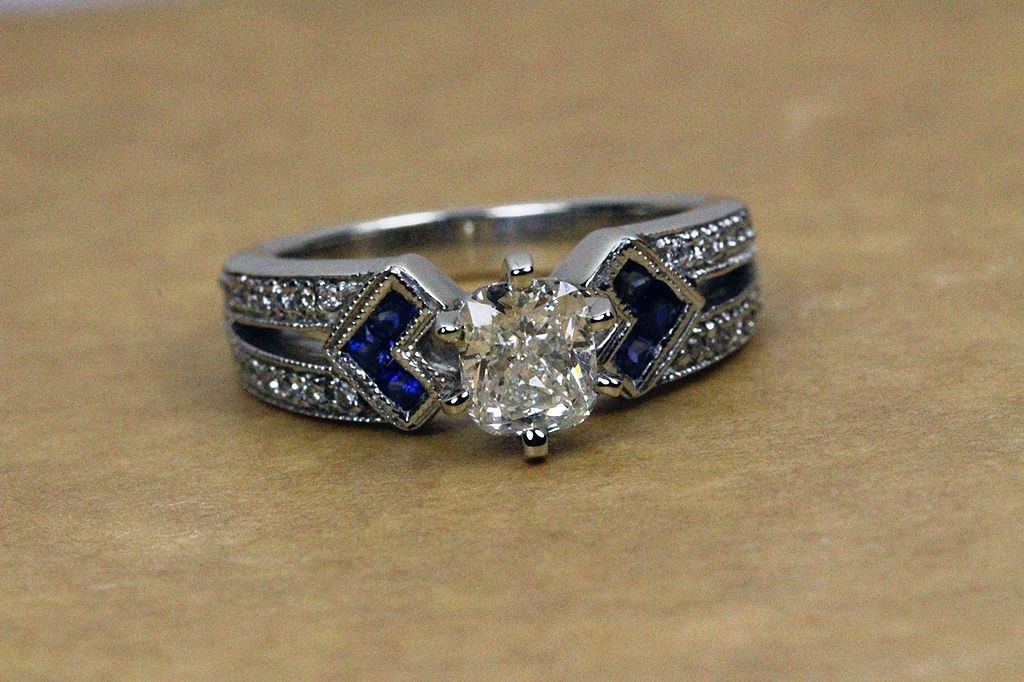 The Art Deco era got its name from the Exposition International des Arts Decoratifs et Industriels Modernes which was held in Paris in 1925. This exposition’s emphasis was mostly dedicated to jewelry with the styles coming from the continent of Africa, Asia and South America.

Popular movements of this time were termed Cubism and Fauvism with the term Cubism used to describe the distinct geometric lines used. This design came about in an attempt to take the flowing lines that typified Art Nouveau style jewelry and bring about a style that was known for cleaner, more rigid lines. These rigid lines paid tribute to the age of modernism with history moving toward the machine age.

Prior to World War 1, women’s fashion was stagnent, consisting of constrictive corsets and garments that covered the flesh. During World War 1, women were required to take part in physical work and these type of garments were not suitable.

When the war ended, women did not wish to return to pre war garments and instead opted for clothing that allowed them freedom, following and wearing such designers as Chanel. This was the commencement of fashion freedom for women.

With more money available after the war and the advent of fashion magazines gave more and more women ideas about fashion ideas for jewelry, clothing and the home.

At this time jewelry influences came from a variety of sources. There were new discoveries in Egypt, such as those of various pharoah’s. With these discoveries came pieces of art and jewelry and it was these items of jewelry that influenced designers.

Other influential areas around the world were India, China, Africa and central America with these many styles paving the path for Art deco jewelry.

In the Artdeco era there were two main schools of jewelry design, Bijoutiers-artistes and Bijoutiers-joailliers. The former had ideas to sculpt gemstones into various pieces of geometric art while using gems such as diamonds as finishing touches rather than having them as the primary focus of the piece.

These pieces of jewelry were made with the help of craft persons did not concentrate on jewelry alone but also sculpting, painting and architecture. With many different skills at hand in the jewelries design, the pieces contained inspiration from many sources and led to some beautiful new concepts, including colors that were used and new lines perceived.

The 2nd school of design, Bijoutiers-joailliers, were using cut gemstones, such as diamonds to enhance their jewelry designs by placing them as outlines or in rows and used unusual shaped diamond cuts in their pieces.

A major influence of theirs was the far east and hence we can see other precious stones such as turquiouse included in the jewelry. Each of these jewelers interpreted the design influences of the time slightly differently.

Where Cartier took influences from the far east, Indian, Persia and China, Van Cleef and Arpels were inspired from Egpyt, whereas Mellerio had more of a oriental influence. However, no matter what the inspirations were of these French jewelers, all were focused on Art Deco design. 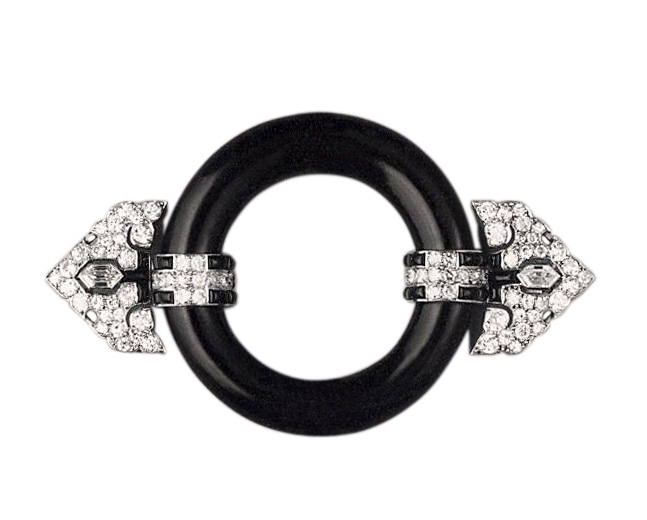 There were a number of innovative ideas born in the ArtDeco period. It was at this time that gem cutters learned and perfected new ways to cut gems into shapes that enable them to created mosaic style designs. Within these designs, different diamond cuts were used, and were placed depending upon the radiance and luminosity, to create patterns in the piece of jewelry.

Jewelers also began to use platinum at this time and, being a very strong metal, less of it was required to ensure any gems were secure. This allowed for lighter designs and even more freedom in the design approach and the production of some beautiful engagement and wedding rings. Prior to this era, jewelers used enameling but with far east influences came the technique of lacquering. Laquering was a far cheaper and quicker process to enameling.

The most important innovation of the time was the ability of invisible setting. This allowed jewelers to mount gems on to their designs using grooves and rails which would mean there was no metal visible to distract from the design and the gems.

Along with rings, there were many other jewelry pieces being made. Among the popular ones of these were earrings. Earrings were fashioned from the shorter hairstyles of the period and so tended to be long.

Designs tended to be linear with smaller diamonds culminating into a larger colored gem at the end. As the Artdeco period progressed, as did earring style and in these later years, earring designs turned to leaves, flowers and shells among others.

Bracelets of this period would begin as narrow pieces containing gems of various colors set out in a pattern. As time went on, wider strap bracelets would produced and these would feature stories using Egyptian symbols or be covered in carved gemstones.

Brooches were very popular and could be seen on various articles of clothing, including jackets and hats. There was a definite Asian influence in their design with patterns styled on pagodas, fountains and fruit baskets among others.

There were many other Artdeco jewelry pieces produced, including watches, ornaments for the hair and various accessories and each of these had the same style geometic patterns set with diamonds and other gemstones. 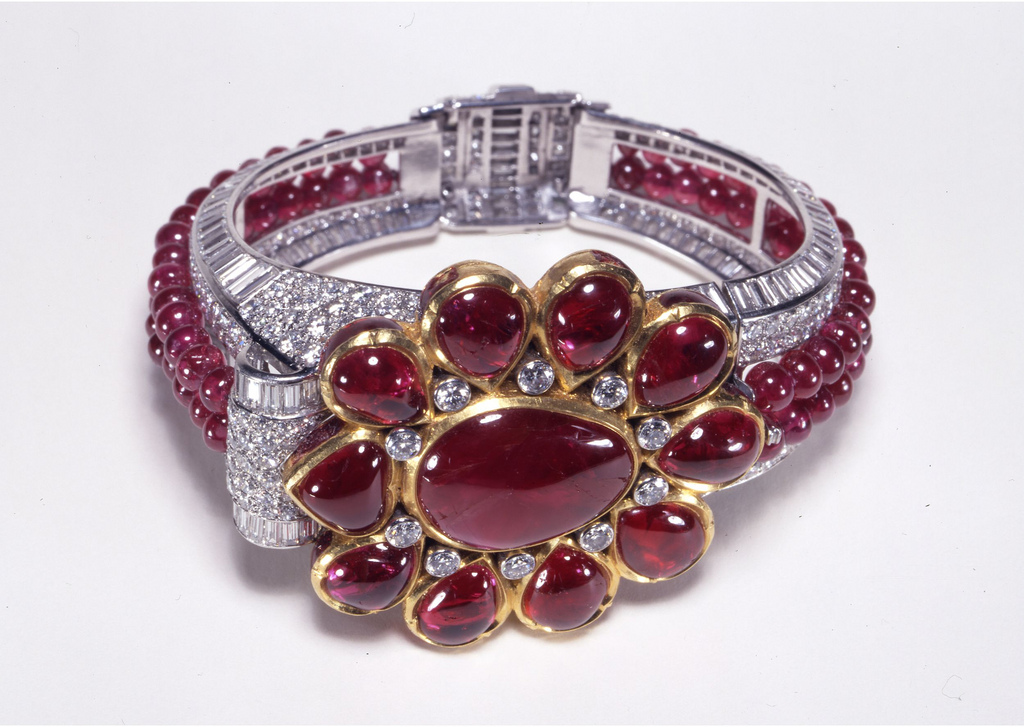 How To Identify The Art Deco Period

The jewelry of the Art Deco period was characterized by wide bracelets, large brooches and large rings covered in diamonds and other gemstones. Jewelry that would convert from one piece to another was popular during this time, an example being the pendant of a necklance being converted to a brooch.

Its designs take influence from designers from various arts and skills but also influenced design in cinema, fashion, architecture, interior design and industry. The era is best known for its bold colors and focus on geometry, using squares, triangles and circles to create patterns.

The fine jewelry was made up of precious gemstones whereas costume jewelry used plastics, enamel, bakelite and faux stones.